Mohiniyattam – a graceful dance form that I would like to explore more – physically and as a keen researcher. This dance form is practiced by artists around the world gaining popularity as years go by. As I am in the process of unlearning and relearning my art forms, I decided to start from where it all began.

A dance form from Kerala, it is said that Mohiniyattam is mentioned in Vyavaharamala of the early 18th century and in the Malayalam novel Meenakshi. Other common references for  Mohiniyattam students have for years been works of Sri. P. Soman, Guru Kalyanikuttyamma, Dr. Kanak Rele, and Smt. Leela Nambudiripad. And not to forget the contributions made by Gurus Kunjukutty amma and Chinnammu amma, and their association with the Kerala Kalamandalam.

But who did Guru Kunjukutty Amma learn from? Was she a performer? Who did Guru Kalyanikutty Amma learn from? How was Mohiniyattam before its revival at Kerala Kalamandalam? Who danced this dance form? Has it always been performed by women? Kerala as a state was formed in 1950, so has Mohiniyattam always been a part of this region? Of course, I have heard how Mohiniyattam was saved from the ‘ill reputed’ women who used to practice it. But where did they learn from? Who are their Gurus? There were a lot of missing links about the origin of the dance form.

In 2014, renowned Mohiniayattam-Kuchipudi artist and scholar Smt. Devika Methil wrote her observations about the state of  Mohiniattam research in Kerala. Her critical observations, brought forward the dialogue about the missing links in the literature about the origin of Mohinayattam. She notes that the PhD thesis by Justine Alexia Lemos had chapters on origins of Mohiniyattam that was one of the most well researched in recent times. Excited by this new information, I tried to track down some of Justine’s papers to find out more.

Thanks to internet, I came across Justine’s paper Radical Recreation: Non-Iconic Movements of Tradition in Keralite Classical Dance on internet. This opened up a new understanding on Mohiniyattam’s history for me. According to her, Mohiniyattam has 3 main growth stages:

The Mohiniyattam that we see now is a highly re-constructed version of the dance form than what was practiced before. Practitioners and Nationalists have helped recreate a dance form sans ‘vulgar’ content, i.e. cleansed it like other Indian dance forms during that period. It was recreated with the idea of womanhood and femininity that supported the nation building process. Later, movements inspired from the environment was embodied into the dance form.

Excited by this new information, I wanted to know more about the dance form that I practice. I spoke to Justine herself about her experience doing her research in Mohiniyattam and more…

Justine grew up in Mendocino, California, on the Pacific coast, in the redwood forest. She began training in western dance, mostly ballet, from when she was four years old. During her undergraduate studies at Hampshire College, she was interested in the relationship between dance and rituals. This focus of her studies paved way for her to meet Odissi Guru, Ranjanaa Devi. Justine went on to become the principal dancer in her company, Nataraj Dancers, and learnt a vast repertoire of Odissi dance as taught by her Guru. Justine performed with the company at many venues across the world.

While trying to come up with her PhD topic, Justine chose to do an ethnographic study of Mohiniyattam as suggested by her Guru. “My Guru Ranjanaa Devi has learnt dance in Kerala when she was younger. She suggested that I take Mohiniyattam as a subject for my academic research. We visited Kerala Kalamandalam together on one of our trips to India.  I was intrigued by the history of Kerala and its relationship to Mohiniyattam dance,” she says. 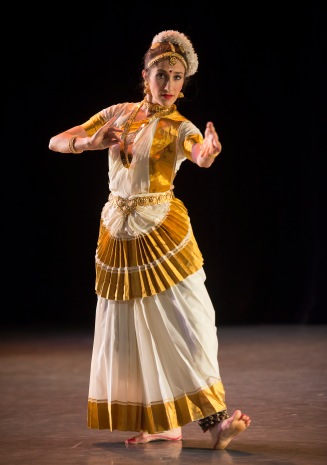 Justine’s advisor for PhD studies was one of the most well-known dance ethnographers in the world, Dr Sally Ness. Dr. Ness provided a wonderful support for her work, though convincing a Department of Anthropology that dance was a relevant subject of study was a bit more challenging. Justine had already completed a year of Mohiniyattam training at Kalamandalam by then on a Fulbright scholarship. This was just after her Master’s degree. During this trip, she created a research network in Kerala. “Sri. Kaladharan of Kalamandalam was very helpful in introducing me to experts who I could interview for the dissertation,” she reckons.

While Justine completed the main research for the dissertation, she was also enrolled at a school of Mohiniyattam in Ernakulam. During this period, Justine studied Smt. Kalyanikutty Amma style of Mohiniyattam so she could have an embodied background in both the Kalyanikutty Amma style and the Kalamandalam style. Justine also spent long hours in the archives at Ernakulam and Trivandrum going through documents to support the historical portion of the dissertation. “Ultimately, I am most proud of the historical portions,” she beams.

Apart from being a Mohiniayattam and Odissi dancer, Justine is also a yogi. She has been training in yoga from her childhood. Currently, she owns and directs an academy of yoga and dance on the Mendocino Coast. “I mostly use yoga to physically support my dance practice but I own and run a yoga shala as well.”

Then came my final question (with tad bit more excitement as usual), When are you publishing your thesis as a book? “Yes! I am working on this and looking for an appropriate publisher. Because I am a mother and also a business owner I don’t get enough time to work on this project, but I do promise that it will come out soon. I am very passionate about sharing my research.”

We are waiting Justine!

WE DO NOT PERMIT THE RE-POSTING OF OUR POSTS IN THEIR ENTIRETY. THE IMAGES FROM THIS WEBSITE MAY NOT BE USED FOR COMMERCIAL PURPOSES.

Hi, I am Swaroopa. A performing artist based in Dunedin, New Zealand. An Indian (a Malayali to be exact!) and a Kiwi living a hybrid life. I live and breathe in the World of Dance.